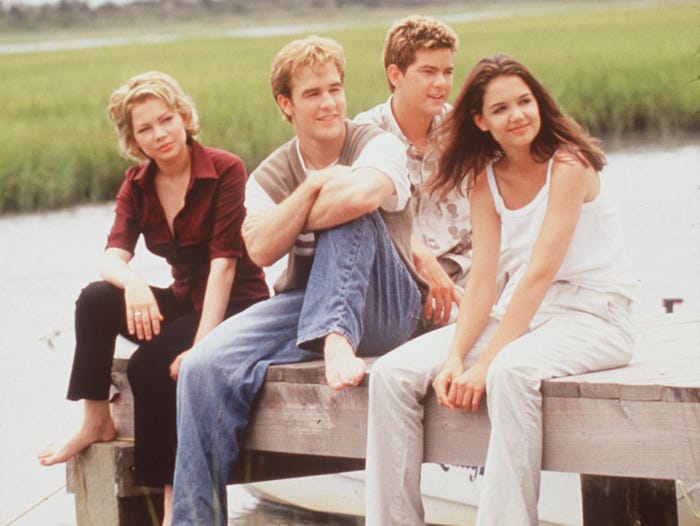 Dawson's Creek may be over twenty years old but it is totally still binge-able today. My tween daughter loves it and is just as invested as I was in my youth. I, however, was lucky enough to experience the series one week at a time over the course of my high school and college years. I lived for Wednesday nights when "I Don't Wanna Wait" by Paula Cole would fill the room and suck me in to their world. Speaking of the theme song, I must rant. Apparently some of the music used in the original series, including the theme song, was only secured for a certain number of years. For some RIDICULOUS reason, no one wanted to pay to renew the theme song so now there is some imposter in its place. DO NOT BE FOOLED. That is not the real song and it is not the same. I recommend googling "Dawson's Creek Theme Song Season 1" and muting your TV while you listen to the proper intro on youtube. You must do this at the start of every episode and switch videos every season.

OK so lets get to the good stuff. Why should Dawson's Creek be your next binge? It's about four small town teens that go through your typical teenage stuff like dances and drinking, making out with your best friend, oh and wanting to kill the cute blonde that just moved to town and the guy you like is suddenly all about her. But wait, it gets better. There is the most epic love triangle of all time! Oh do I love a love triangle!!! Still, I haven't even gotten to the best part. By far the greatest asset to the show is Joshua Jackson who plays the lovable Pacey Witter. I was madly in love with him and even considered taking an unauthorized road trip across the country in the hopes I might run into him in the small town they filmed the TV show. This was ridiculous on many levels. Regardless my infatuation with Joshua Jackson will likely burn inside me until my dying breath. All joking aside, as I'm re-watching this show I realized something that I had completely forgotten about this character. He is everything I ever wanted in a boyfriend, and I was probably never in love with Joshua Jackson but Pacey Witter. I never found Pacey but I'll always have Dawson's Creek.

Start your binge today on Netflix!